The danger toddling around you 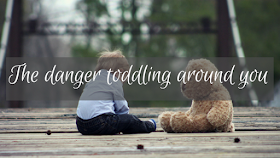 Everyone always talks about not hurting the baby. I stopped wearing my wedding rings because I didn’t want the stones to scratch his delicate skin. I supported his neck while carrying him in positions that were far too uncomfortable for me. I made sure I kept him away from the oil splatters from cooking and tried not to use chillies for fear of burning his eyes with my fiery hands.

But no one talks about how deadly that helpless little baby is to his parents. Parents everywhere are suffering in silence. Co-workers wonder how she got that black eye or how it’s possible that he’s off work for an eye injury. They roll their eyes without understanding because we don’t talk about the abuse we get from our kids. This week has been a record of beatings from Squeak. I even reached out to parents on Twitter to check that I was not alone.

I was right! Parents and caregivers with a seemingly happy relationship with their babies came forth with stories of torture and physical abuse. Attempts at eyes being gorged out while parents innocently sleep. Skin and corneas scratched open by little hands out for blood. Walking into dad’s nethers to prevent future siblings. Bruised ribs from a 10kg wrestling contender. Head butts to the face resulting in bloody noses and black eyes from their deadliest weapon yet – their oversized heads! All this while parents were innocently going about their own business. I mean, one was even sleeping!

They blame it on their toddlers not yet mastering the art of walking (straight into male parts) or still learning their fine motor skills (waving deadly objects around) or just being curious (poking around at eyes, ears, noses and mouths) or even that parents did not cut their sharp nails (deadly talons). They may have the world fooled but not me. I know their real intent.

We need to stand up, we need to unite and we need to fight back! Lest we allow these tiny humans to rule our lives and beat us into submission. Who is with me?
Splash at 08:22
Share